Summer is heating up and so is Olympic fanfare. With just a few weeks to go, Olympic swimmers, gymnasts, hurdlers, shot-putters and other world-class athletes are fine-tuning their practice sessions in hopes of bringing home gold. The U.S. archery team is no exception.

At the 2015 World Archery Championships in Denmark, the U.S. women qualified for an individual slot, and the men qualified a full team (three slots). At that time, the slots were just that: open slots. The final stage of the U.S. Olympic Archery Trials in late May sealed those slots with names and faces.

The four-person Olympic archery team was determined after three grueling stages of competition narrowed the field to 16 competitors for each gender, and then to eight, before naming the official team. Brady Ellison, Zach Garrett, Jake Kaminski and Mackenzie Brown topped the leaderboard after Stage 3, and officially punched their tickets to the Rio 2016 Olympic Games.

Mackenzie Brown, the Girl on Fire 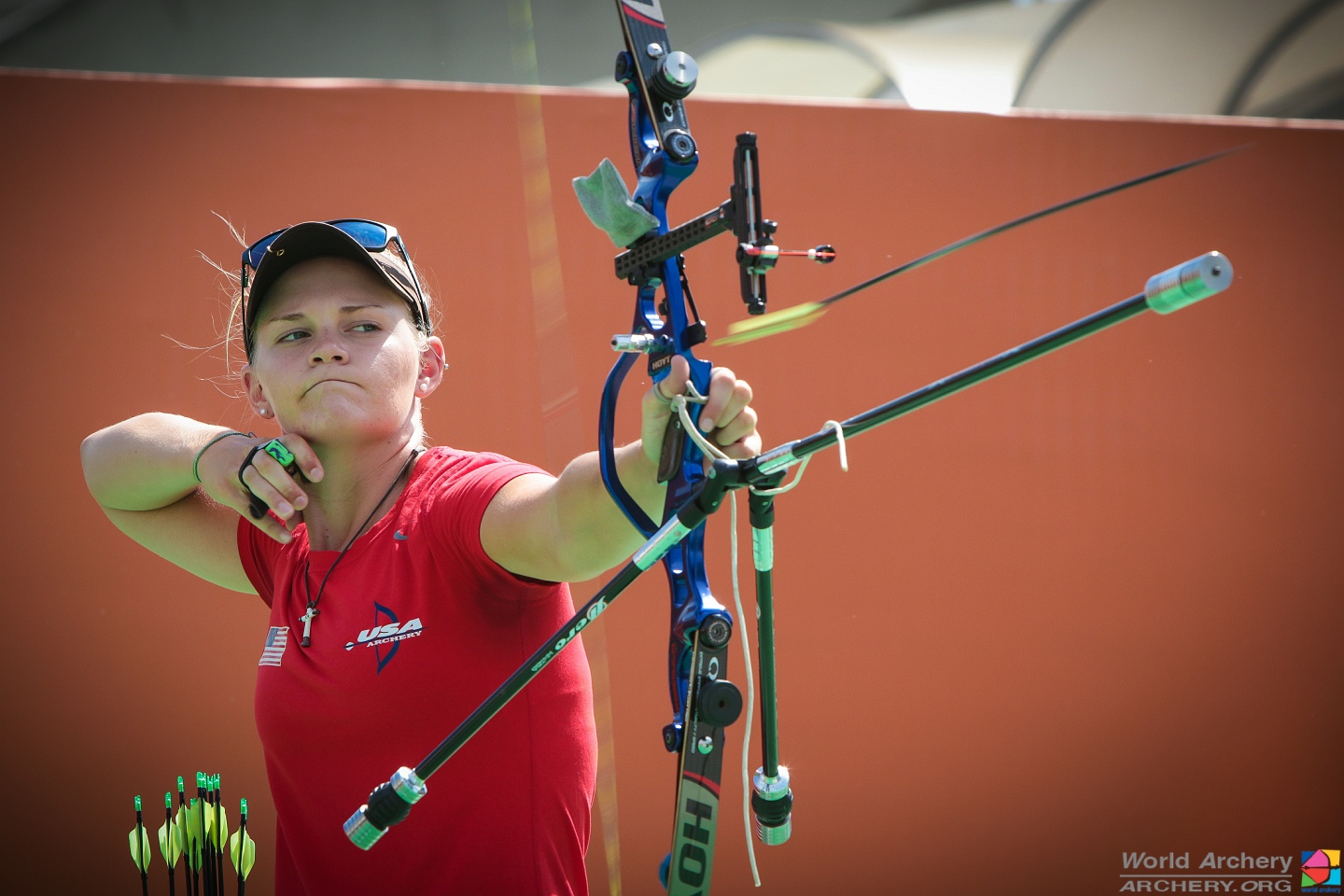 Mackenzie Brown, 21, hails from Flint, Texas, and is ranked No. 4 in the world. She was introduced to archery by the National Archery in the Schools Program (NASP). At the time, she competed in swimming and, according to Kathy White of the Easton Foundation, hoped to eventually make the Olympic swimming team. But with her newfound love and success in archery, Brown set a new goal: make the Olympic archery team. “I already had that (Olympic) goal with swimming, so I just kind of transferred it over to archery,” Brown told White.

She’s been on fire ever since. Brown’s early success at the regional level sealed her spot on the JOAD Dream Team, and offered a sneak peak of life as an Olympian. More recently, at the World Cup in Poland, she earned the nickname “Girl on Fire,” a nod to “Hunger Games” heroine and archer Katniss Everdeen. The DJ played the Alicia Keys song by that title as Brown approached the podium to claim her gold medal, and the nickname stuck.

Brown earned the bronze medal at the Rio test event earlier this year. Does her success at Sambodromo foreshadow Olympic dreams realized? We hope so. “This girl is on fire” and blazing a trail for USA Archery’s Olympic success. Brady Ellison, 27, is a two-time Olympian, Olympic medalist, the No. 4 archer in the world – and one of the most formidable competitors in archery for the past several years. He received his first compound bow at age 7, and arrowed his first bear at 11. Two years later Ellison hit the competitive archery circuit, shooting his compound at 3-D tournaments.

He won several 3-D golds, but a mishap in 2005 catapulted him to recurve success. When his compound bow’s bowstring broke, Ellison borrowed a friend’s recurve bow and was soon chasing Olympic dreams.

In 2006, he moved to Chula Vista, California, to live and train at the Olympic Training Center. His natural talent with a recurve put him on the fast track to success. He earned the top slot at the U.S. Olympic archery trials, and made his first Olympic appearance at the 2008 Beijing Games.

Jake Kaminski: “I Am” “I am” is tattooed on Jake Kaminski’s hand to remind himself who he wants to be, no matter the challenge. Kaminski shared his archery “start story” and the meaning behind his tattoo in a 2012 interview with Kellogg’s. His archery journey started at age 5 when his dad won him a compound bow in a raffle. At 7, Jake set his sights on the Olympics and received a recurve.

Kaminski recognizes the sacrifices others made to encourage and support his Olympic dreams. In a 2012 blog post on Huffington Post, Kaminski gave his hometown a big “thank you” for their years of sacrifice and support.

“Over the years I have signed several different companies as sponsors to help support me in archery; everything from bows to the accessories and tools used to set them up,” Kaminski said. He seized the opportunity to pay it forward and donated $18,000 worth of equipment to his hometown’s JOAD club. “As time goes on things become dated or worn out for an elite-level archer, but is fresh and new to the up and comers of the sport.”

Kaminski’s desire to give back and encourage others should prove helpful as the men’s team welcomes newcomer Zach Garrett to the Olympic ranks.

Zach Garrett, the New Kid on the Block Zach Garrett, 21, ranks No. 5 in the world. The Missouri native received his first bow, a stick bow hand-carved by his grandpa, when he was 4. According to the Kansas City Star, Garrett attended his first 4-H Club tournament at age 8, and competed at a national tournament at 14. His mother, Robin Garrett, shared her son’s archery story, noting that he was a perfectionist with Olympic goals at a young age.

Garrett’s drive and determination led him to the JOAD program in Springfield, Missouri, which was about three hours away. “Two to three times a month for about a year, Robin Garrett would drive her son and daughter from Wellington to Springfield for weekend tutelage that started with taking the bow away from Zach Garrett and making him work with a stretch band,” wrote Vahe Gregorian for the Kansas City Star.

Shortly after graduating high school in 2013, Garrett moved to the Olympic Training Center in Chula Vista, where he further honed his shooting and mental game. After three years of resident training, Garrett’s sound technique and mental clarity under pressure helped him make the Olympic team. Now he has a new goal.

“I won’t feel accomplished … until my teammates and I are on the podium,” Garrett told the Kansas City Star after making the Olympic team. “(Today) is only about halfway to the goal.” The four Olympic team members are stationed at the Olympic Training Center in Chula Vista, California. “We have a strong team compared to other Olympics because we selected the best archers through this Trials process,” national head coach KiSik Lee told USA Archery. “They are getting stronger and stronger day by day.”

Kaminski also spoke to USA Archery, highlighting each archer’s unwavering dedication over the past four years. “It’s a long road, it’s not, as they say, every four years—it’s every day and that’s the truth,” Kaminski told USA Archery. “I’m honored to make my second consecutive team, and am proud to represent the USA in Rio.”

Rio 2016: How To Watch Olympic Archery