From pottery and sculptures to paintings and photographs, artists have documented the bow and arrow’s evolution throughout much of human history. That might help explain archery’s recent growth, including its prominence in fashion, movies and television!

Get inspired by Egyptians doing battle, Greek gods and goddesses hunting, and whimsical maidens drawing bows aimed skyward. Then, get outside and create your own archery art! Kim is a Seoul artist in Brooklyn, New York. Her artwork is mixed media, which incorporates drawing, painting and layering papers and hand-sewn elements. Overlapping textures “enrich the experience of viewing the story.” She completed this piece, featuring a girl shooting from atop an elephant, in 2010. Judson Jennings, owner of Forked Up Art, sculpted his first silverware figurine in his mother-in-law’s garage in 2010. The company boasts 1,500 retail accounts in the United States and five other countries. The Utah-based company prides itself on unique jewelry, practical items – bowls, napkin rings, salt-and-pepper shakers and more – and figurines, including this mini-bowhunter. Schoepf is a designer and photographer from Minneapolis. His illustration, titled “North,” has been featured on pillows, totes and graphic tees.

Lalique is a French master jeweler known for his luxury glassware items. He crafted this car mascot in 1926. Just imagine this archer perched proudly on your car’s hood! Goodaboom painted a series of prints depicting the London 2012 Olympics, including three archery prints. “(It is) a very aesthetic sport,” Goodaboom said. “Inspiring to my artist’s eyes.” He painted archers from Italy, the U. S. and the United Kingdom.

“I had never seen archery in competition before,” he said. “Never even had a (bow) in my hands, but I remember a time when I wanted to learn it.” 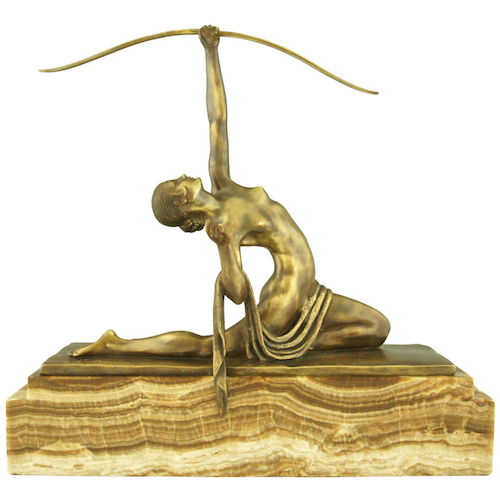 Bouraine is a French sculptor born in 1886. He completed this piece in 1930. The sculpture features a bronze archer on an onyx base. A picture of this statue appears on the cover of The Encyclopedia of Decorative Arts 1890-1940, by Philippe Garner.

“The Archer,” by Frederick Sands Brunner The horseback archery in this painting is awesome! Brunner is an American artist born in 1886. His work appeared on the covers of The Saturday Evening Post and Ladies Home Journal, and advertisements for Coca-Cola, Canada Dry Ginger Ale and more.

Terracotta Neck-Amphora, by the Princeton Painter This terracotta jar dates to about 540-530 B.C. It stands 13 inches tall and features a black-figure technique typical of sixth-century B.C. Athens. The bow-wielding figure? Greek god Herakles, most commonly known as Hercules. Read about his archery battle with the three-bodied Geryon here. Saint-Gaudens was commissioned to create a revolving ornament for a tower in Madison Square Gardens. In other words, he needed to make a really large, expensive weather vane! He depicted Diana, Greek goddess of the hunt. The bronze 18-foot-high Diana was installed on the tower in 1891, but it was too tall to rotate in the wind. The original was replaced in 1894 with a 13-foot version, which now stands in the Philadelphia Museum of Art. You can see a half-size model of the second version at the Metropolitan Museum of Art. This image is from a collection of 650 images that comprise the Myrtle Tyrrell Kirby Fashion Plate Collection. The fashion plates were featured in 19th-century women’s periodicals, and were hand-colored until the mid-1800s. Can you imagine your favorite magazine being colored by hand?!

“The Archers,” by Sir Henry Raeburn This portrait dates to about 1790, and features Robert and Ronald Ferguson. The Fergusons joined the Royal Company of Archers in 1792 and 1801, respectively. This painting is on display in The National Gallery in London. This oil canvas was painted in 1872. It portrays the English artist’s three daughters. It remained a family portrait until acquired by the Royal Albert Memorial Museum and Art Gallery in England. It’s one of the most famous images of Victorian affluence and leisure.

Feeling inspired by art history? Check out these 10 pieces of archery art!

Getting Started in Archery