Mackenzie Brown is all about precision. Just ask her opponents at the Aquece Rio tournament last week, otherwise known as the Rio 2016 Olympic test event. At the Sambodromo – site of what will be the world’s biggest archery party next summer – Brown’s arrows sliced the air for 70 meters and hit the center repeatedly to win a bronze medal.

Does a podium finish at an Olympic test event mean Brown will repeat the feat at the Rio 2016 Olympic Games next summer? Nobody knows. What we do know is that Brown, 21, has been ramping up her on-field performances just in time to make fans take notice. Here are five reasons to love this rising star: 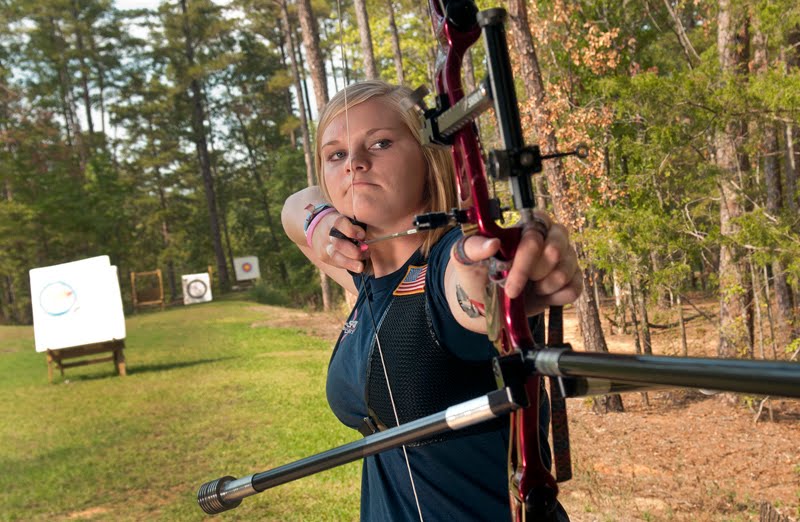 Every Olympic hopeful must start somewhere. For Mackenzie, it was in the pool, where competitive swimming helped hone her skills: “I was always a competitor at whatever I chose to do,” she told the Easton Foundations in a recent interview. “I already had that (Olympic) goal with swimming, so I just kind of transferred it over to archery.” Brown got her archery start in the National Archery in the Schools Program during her middle- school days in Texas. At age 13, she was invited to a training camp for the Junior Dream Team, a program that identifies young archery talent, and provides coaching and training. Mackenzie’s efforts in the Junior Dream Team helped fast-track her into a coveted spot at the U.S. Olympic Training Center, where she lives and trains full-time in Chula Vista, California.

She puts her game face on Mackenzie said in a recent interview that she loves match play, which is head-to-head, Olympic-style competition where one competitor wins the match to eliminate their opponent from the game. “My strong suit is in match play,” she said. “I think it’s a little bit more psychological. It’s almost two different games. When I’m right there with a competitor, it’s game on.” At tournaments, she’s quick to support friends and teammates, and then she snaps photos and laughs easily in her spare time. But when it’s time to step into the zone, Mackenzie’s all business.

She stays positive despite setbacks She’s been competing internationally for several years, but Mackenzie started dialing up her performances this year, just in time for Rio 2016. She started her season by helping her team to a bronze-medal win at the Shanghai World Cup in April. She then just missed a berth in the World Archery Championships and Pan Am Games, which kept her home for two of the year’s biggest events. She didn’t let that stop her, though. She won a silver medal at the World Archery Youth Championships in June, followed by double gold at the World Cup in Poland, and a team bronze at the World Cup in Medellin. This week’s bronze medal at the Olympic test event gave her six international medals in just five months.

And she’s a team player Mackenzie’s next goal: not just make the Olympic team, but win at Rio 2016. To get her best shot at a medal, she knows two things must happen. First, Team USA must qualify a full women’s team for the Olympics. Second, if she makes the team, Mackenzie must help her teammates as much as she competes with them.

At the Olympic test event, where the team finished fourth, Mackenzie did just that. “We were excited about the way we shot,” she said. “We shot really well as a team. All three of us are very used to shooting with each other. It was just like any other day where we practice team rounds together. As for securing our other spots, I’m really confident, especially since we won in Poland and then took the bronze in Colombia. And now, coming over here, it was just really exciting to see that we’re continuing to move in that direction.”

Archery: How to Shoot in the Wind