The Himalayan nation of Bhutan declared archery its national sport in 1971. One year later, King Jigme Singye Wangchuck of Bhutan introduced his country and the world to an important concept: Gross National Happiness. He believed noneconomic aspects of well-being enrich the country and its citizens.

Archery has many benefits, and the happiness of achieving goals by arrowing targets is one of them. So, could Bhutan’s happiness stem from declaring archery the national sport a year earlier? It’s possible.

Here’s what you need to know about Bhutanese archery. The Bhutan Olympic Committee describes archery as a “celebration of the Bhutanese way of life.”

Although archery became Bhutan’s national sport in 1971, love for the sport dates to 600 B.C., when an Indian prince proved his aim, accuracy and strength in an archery contest to win the beautiful princess.

Since then and throughout history, the bow and arrow have aided the Bhutanese in battle, ushering in an “era of peace” and welcoming archery as a symbol of festivity and competition.

Every village in Bhutan sports an archery field, and no festival or celebration is complete without archery and mask dances. Traditional tournaments between villages are battles for honor, and include feasts and prizes. The tradition continues even now.

Targets at traditional Bhutanese tournaments are placed at both ends of a 145-meter range. Archers shoot one pair of arrows at each target on the opposite end of the range. Competitors dance in celebration when archers hit their target.

Although traditional Bhutanese bows and arrows were made of bamboo, most tournament archers today use modern compound bows from the United States. In keeping with Bhutanese tradition, these American imports lack the high-tech sights and trigger releases commonly used by compound shooters.

Although compound bows are most common, a select few employed and trained by the Bhutan Archery Federation shoot recurve bows to compete internationally.

In fact, several Bhutan archers hope to qualify for the Rio 2016 Olympic Games. 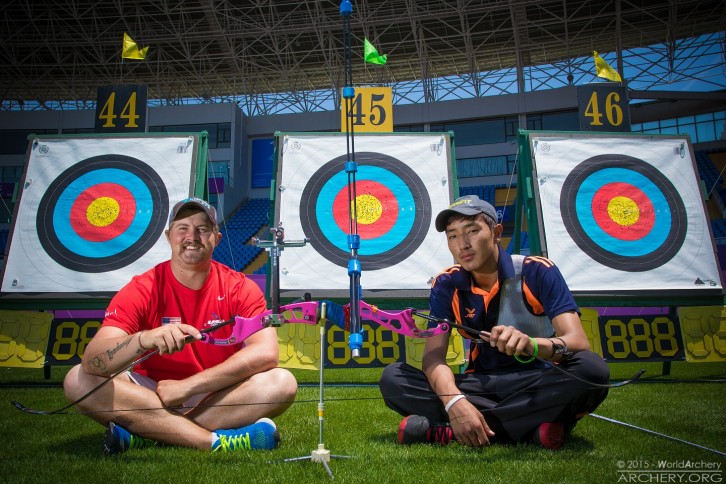 In May, Bhutan sent one recurve archer and its first three-man compound archery team to the Shanghai World Cup. Kinley Tshering, a highly touted Olympic hopeful from Bhutan, shot a familiar bright pink recurve. World Archery reports Brady Ellison shot the bow in 2010 to dominate the indoor circuit and win the first of his Archery World Cup Final Champion titles.

“It was planned that Brady would come to Bhutan to shoot and then leave his bow,” Tshering said. “He couldn’t come in the end, but he still donated the equipment and I’m using it.”

Tshering is one of 12 Bhutanese athletes training full-time for a spot on the country’s team for the Rio 2016 Olympics.

Although international competitors like Tshering wear bright orange uniforms while competing, traditional Bhutanese archers don sneakers and knee-high socks beneath ghos, a knee-length robe tied at the waist by a belt-like cloth called a kera. After shooting a target, archers tie a colorful sash to their belt. No Bhutanese archery competition is complete without dancing. The dances taunt other teams and celebrate the archers’ aim.

According to DW.com: “Each team usually has their own group of dancers and singers. They serve not only to cheer for the team, but also to distract their opponents through songs and dances. Every time a target is hit, a kind of howling can be heard.”

“When we play archery, it’s not just archery,” said Kinzang Dorji, former president of the Bhutan Archery Federation. “The players also have to participate in singing and dancing. Family members also join in, so it’s a kind of a social event.”

In fact, it’s a social event that brings the people of Bhutan and beyond together.

With the Rio 2016 qualifying events approaching, archery fans worldwide are uniting to cheer for their favorite sport. Archery is expanding and gaining new athletes daily, and that’s a reason for “Gross (Worldwide) Happiness” in the archery community.

Want to learn more about archery in Bhutan? Watch the video below. Ready to get started in archery? Find an archery shop near you.

5 Fun Ways to Get Started in Archery Right Now

Bows and Arrows on the Big Screen: Did They Get It Right?

Improve Your Aim: Using a Sight