On “Arrow,” archery is serious business. Before the much-anticipated Season 3 premiere of the CW Network’s hit, the show’s Archery Technician and Consultant Patricia Gonsalves shared exclusive details about training the dynamic cast, choosing bows for each character, and what fans can expect this season.

Gonsalves is the founder and lead instructor at Lykopis Archery in British Columbia, Canada. When Archery 360 caught up with her, she was heading to the “Arrow” set to oversee the archery scenes for a new episode. “Stephen is fun to train, and he’s remarkably good at archery and at looking good doing stunts where he’s flying through the air,” says Patricia Gonsalves, archery technician and consultant for the CW Network’s “Arrow.” Photo: Patricia Gonsalves

The archery on “Arrow” looks pretty realistic. How many of the archers do you train for filming?

All of them. For safety reasons, the actors must have a lesson in safety before they can shoot a bow. Then I go onset during filming to implement archery safety protocol. Usually I only get two to four hours with each actor, but I trained Stephen Amell (Oliver Queen/Arrow) for two months before the series premier. I love that everyone involved with “Arrow” is fully committed to making the archery as realistic as possible. Before they can shoot a bow onscreen, every actor – including Colton Haynes, Stephen Amell and David Ramsey – must complete a safety lesson and two to four hours of training.

Do you teach all the archers the same techniques? Or do you train them differently if the character is a hero or a villain?

The character doesn’t determine the style of archery, but the bow determines the style. For example, if the character shoots an American Flatbow made in the Pacific Northwest, [the character will shoot a style that is consistent with that bow].

Are there any bows that you really like and want to feature on the show?

Yes! But I can’t tell you about the bow. A character uses it this season.

What can you say about Season 3? Do you help choose the bows for the archers?

I’ll get a first draft of the script for an episode and will form an idea of what bow will work for that character or episode. I’ll choose a few bows that will work for the character and then the production department makes the final choice.

When Oliver got a “superbow” in Season 2, the production department wanted a unique bow that wasn’t a compound. He shoots an Oneida Kestrel, which looks like a compound because is has cams, but has limbs shaped like a recurve. Most viewers had never seen a bow like the Kestrel, and everyone was really excited about it. In Season 2, Roy/Arsenal used a couple of bows, including a Scythian Asiatic bow, which was sometimes used by horseback archers. This season, he uses a recurve. The production team wanted a compound bow for Malcolm Merlyn, and Nyssa al Ghul and the League of Assassins all use the same modified PSE compound.

NOTE: Archery 360 contacted Precision Shooting Equipment (PSE) to find out what model bows Malcolm, Nyssa and the League of Assassins use. PSE leaders said these bows are PSE Chaos ADs.

Tell me what we really want to know: Which actor is the best archer in real life?

All the actors are amazing!

OK, tell something about each one.

Stephen is fun to train, and he’s remarkably good at archery and at looking good doing stunts where he’s flying through the air.

Colton Haynes (Roy Harper/Arsenal) is a dancer. Training him presented some unique challenges because he wanted to dance while he was shooting archery!

Manu Bennett (Slade Wilson/Deathstroke) didn’t shoot a bow for the show but he showed up at my studio to learn about archery.

Katrina Law (Nyssa al Ghul) was very focused and committed to getting the archery right. I can’t say enough nice things about her.

Celina Jade (Shado) is a martial artist, and she took the archery training very seriously. She lives in Hong Kong now and she still does archery.

Byron Mann (Yao Fei) was very intense. He wanted to make sure he got the archery right.

I read that all the bows on “Arrow” have the cables removed for safety reasons. What do you use to replace the cables? Is it elastic?

I don’t know where you read that, but it isn’t true! All the bows are real, and they work. The archers shoot the bows on set, which is why I’m there as a technician and consultant. There’s only one bow that doesn’t work, but I can’t say what bow it is.

What else can you say about the equipment on the show?

How many bows are made for each character?

I can’t say exactly, but each recurring character has more than two and less than 10 versions of the same bow. Stuff happens on set and sometimes we have to swap in new bows. Guest characters may only have one bow because they won’t use it enough to need a backup.

Your job is so awesome! How did you become the archery trainer for “Arrow”?

I’ve been an archer for 32 years and have just always loved it. I was a chef for a long time, and me working on “Arrow” is one of those inspirational stories. I was hit by a car a few years before I got connected with the show. At that time, I was no longer a chef and wasn’t sure what to do because I didn’t think archery was a career. I taught private classes at an archery place in Vancouver and got a call from some guys who wanted “the full, real deal” archery lesson. Six archers showed up, and some of them are now on the “Arrow” stunt team. That archery lesson led to my connection with “Arrow.” 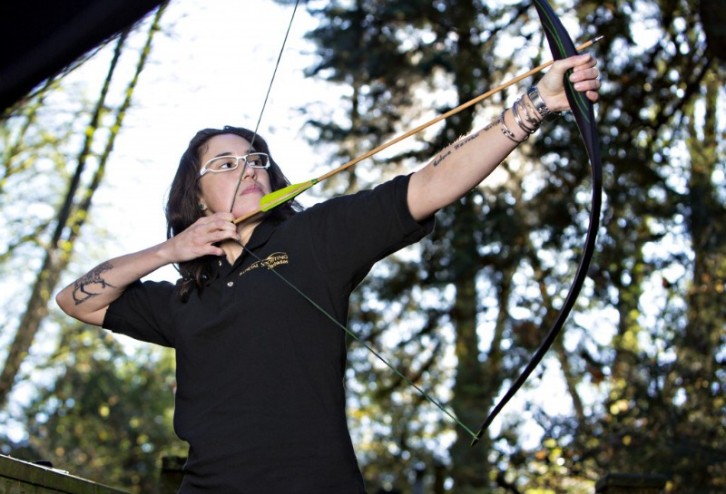 Patricia Gonsalves’ connection with “Arrow” began with teaching an intensive, four-hour archery lesson to six archers, some of whom are now on the “Arrow” stunt team. Photo: Patricia Gonsalves

Well in this case it turned out to be an intensive archery lesson for these guys that wanted to learn everything about archery. So I took all my bows – flatbows, longbows, Asiatic composites, everything – and taught them as much as I could in four hours. Then I went away for the weekend and when I got back in town, I found out their connection to “Arrow.” They wanted me to do a formal interview, which led me to the role I have now with the show.

One last question. You’ve traveled around the world for archery documentaries and trained TV stars in archery. What’s next for you?

I’d love to do any show with archery. I’d really like to do “Once Upon a Time” or “Outlander,” or a period piece about Native American archery.

Arrow Returns: Why You Should Be Watching