OK, first a disclaimer: By no means is this an exhaustive list, nor are its items in a particular order. But these 12 team uniforms bring color, style and a little pizazz to the archery field. 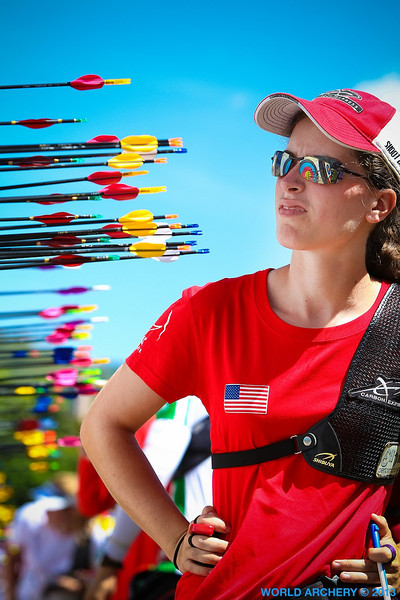 We admit it: We’re biased. Team USA’s been rocking red shirts since the London 2012 Olympic Games, and the logo on the back is distinctive. The Americans score points for their patriotic style. OK, the skorts are A-DORABLE. We think they could be pushing the “fingertip length” rule just a hair, but we won’t quibble. They’re especially great when matched with a big, fabulous sun hat. These uniforms are just plain sharp. The blue and yellow reminds us of a sunny summer day, and the wind pants are snazzy enough to keep archers cool in the sun and warm in a breeze. These outfits – done in the style of the Mexican flag – are fashion forward, rocking the red, white and green. In fact, we think other countries could follow Mexico’s example in showcasing their national flags. We like the orange! To our knowledge, the Dutch team is the only one sporting orange shirts, and it’s a sunny, happy color that speaks to calm winds and arrows in the 10 ring. India is an archery superpower, and no wonder: Archery is second only to cricket in popularity. We saw Deepika Kumari and company sporting blue shirts last year, and we think it’s a cool, professional look. This team’s green and yellow uniforms are as distinctive as the “Aussie! Aussie! Aussie!” cheer that haunts opposing teams at nearly every match. These uniforms from Down Under get the snazzy vote. Yep, that’s a maple leaf on the shirt’s side. Made by archery clothier Toxofil, Canada’s shirts combine national colors, the nation’s flag and the all-important light color that protects archers from heat. Bright and cheery, these yellow and blue uniforms adorn one of the world’s best men’s recurve teams. OK, the guys show just a little bit of leg in those shorts. But we think it’s cute. Those shirts, though! Archery South Africa – which just launched its very own TV channel – sports some of the snazziest designs out there on their shirts. National colors, check. Super artsy design, check. When archers trade team shirts, this is one of their most sought-after jerseys. Modeled in this pic by compound superstar Marcella Tonioli, Italy’s shirts incorporate the national flag’s green, white and red – and a bit of blue for variety. These are probably the most true-to-flag uniforms, and one of the most distinctive shirts on the field. With outfits by team sponsor Adidas, GBR rocks the Union Jack in all its glory.

Archery Party: Cheer for Your Favorite Team in Style!

Real or Not Real: Arrow Flight