Archery is hot right now, and so are the characters shooting bows and arrows on TV and in movies. Beyond the famous, attractive characters like Katniss Everdeen (Jennifer Lawrence), Oliver Queen (Steven Amell) and Legolas (Orlando Bloom), plenty of other archers consistently score 10s. Here’s a roundup of lesser-known archery characters – and some real-life archers – who smolder, with or without flaming arrows.

Before appearing as trident-toting, smooth-talking Finnick Odair in “The Hunger Games: Catching Fire,” Claflin shot arrows as Prince William in “Snow White and the Huntsman.” “Hot” could describe how Peter Mayhew, the actor who played this iconic role, probably felt while wearing the furry costume often called “the walking carpet.” But with “Star Wars Episode 7” due for release in 2015, Chewie belongs on this list. He’s the only character with a Wookiee Bowcaster crossbow/laser gun, which counts for something.

Known for his roles in action and romantic movies including “Transformers” and “Safe Haven,” Duhamel gave Ellen an archery lesson and hit the bull’s-eye on “The Ellen DeGeneres Show.” She bowhunts elk and eats the meat, and even shot her bow on “Jimmy Kimmel Live.” Eliza Dushku says she only hunts what she plans to eat. Photo: The TV Addict

As Richard O’Connell in “The Mummy” movie trilogy, Fraser often carried two pistols. But Fraser is a real-life archer who told this to “RadioTimes“: “I was researching a role where there was a famous archer called William Tell and he used a cross bow. He had to get one shot that he couldn’t miss. Long story short, I picked up an English longbow and went out in the backyard, started firing at tree stumps, was horrible at it, lost a lot of expensive arrows and it kind of just started from there. Although I don’t think I have the guts to actually hunt anything and kill it. There’s bull’s-eye targets and big bags of sawdust in the backyard.” Green plays Persian Grand Admiral Artemisia in “300: Rise of an Empire.” DirectConversations.com/Tim Lammers said: “Adding to the fun for Green on ‘300: Rise of an Empire’ was to get trained in the ways of the warrior. Not only did Green dive into an intense regimen to get fit physically to do all her stunts, she also became proficient with knives, swords and a bow and arrow.” 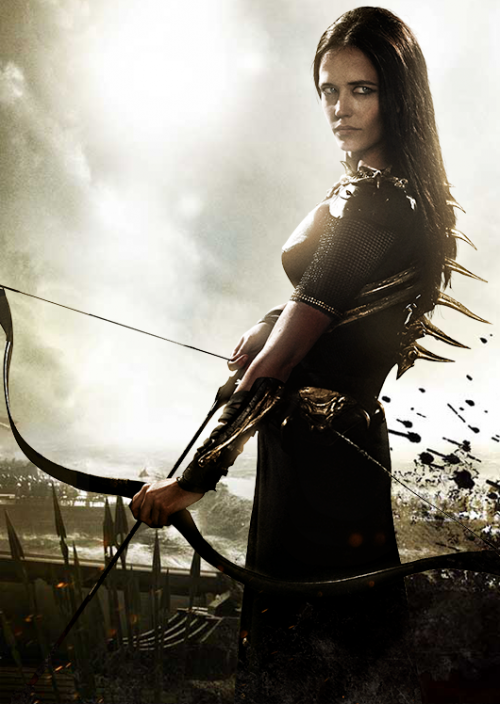 Eva Green did her own stunts as villain Artemisia. Photo: ArcheryToronto Blogspot

“Outdoor Life” said: “Mathayus the Scorpion King’s bow has the power of a cannon. Bad guys don’t get pierced by The Rock’s arrows – they get blown backward and through walls. I hope he has a pretty hefty let-off on that thing.” Dwayne “The Rock” Johnson as The Scorpion King, Photo: Seyircikedi.com

Of her role as Mira on “Spartacus: Vengeance,” Law told Maxim: “I did the gladiator boot camp with the boys, and it kicked my butt. I don’t think I could walk for four days. I also did sword, dagger, and bow-and-arrow training.” Law reprised her role as a bow-and-arrow-shooting beauty as Nyssa al Ghul on “Arrow.”

Liu – currently appearing on CBS’ “Elementary” –  has posed with a bow as part of an Olympics-meets-fashion photo shoot for “Harper’s Bazaar,” and wielded a crossbow in “Rise: Blood Hunter.”

“I like the character of Andromeda because it’s a chance to create a real heroine for young girls,” Pike said of her character in “Wrath of the Titians” in a recent interview. “Andromeda has made a big journey from the end of the first film. You knew then she was a girl who was helpless and needed to be rescued. She’s going to make sure she never needs to be rescued again.” Rosamund Pike in “Wrath of the Titans,” Photo: TheMovieBuff

He’s tasked with protecting the elusive Oliver Queen as a bodyguard on the CW’s “Arrow,” but John Diggle stood in for the hooded vigilante in one episode.

Reed played Allison Argent on MTV’s hit series “Teen Wolf” for three seasons. When Argent died this season, Archery360 paid tribute, saying: “Thanks to her father, Argent became a bow-and-arrow-wielding force to contend with, and became an invaluable werewolf hunter. And in the eyes of viewers across the world, Argent became a symbol of strength and bravery in a teen-aged female character, defining herself outside of her relationship with the male lead.”